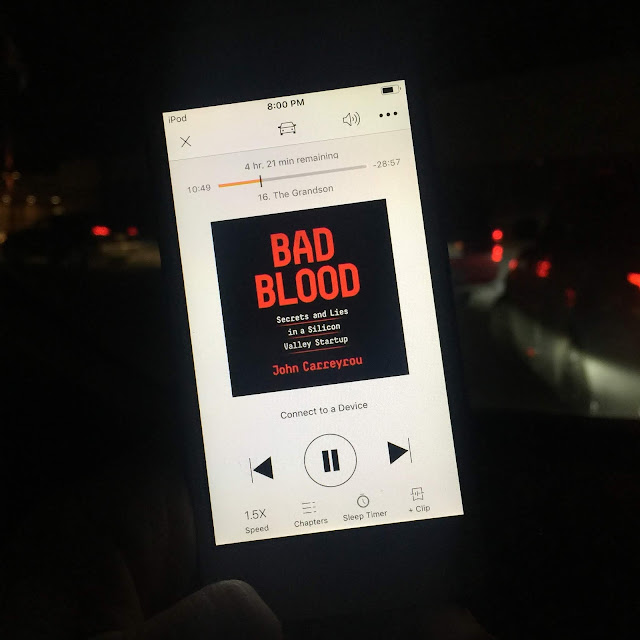 John Carreyrou's Bad Blood: Secrets and Lies in a Silicon Valley Startup blew my mind.  It's a meticulously researched account of Theranos, the medical device/technology startup that Elizabeth Holmes dropped out of Stanford to start.  She raised billions with smoke, mirrors, and her magnetic personality.  She earned the trust and money of well-known, successful, seemingly smart people and even large public companies.  She promised amazing blood tests with one drop of blood, and she was willing to put the health of many at risk before admitting that her company's devices couldn't quite deliver.  You couldn't make this stuff up.

This book was especially interesting to me because I have always been intrigued by the larger than life, narcissistic personality type.  It was also interesting to me because my husband invests in health care companies (not startups so, thankfully, not Theranos) for a living.  Even for those who don't share my personal interests or frame of reference, this book is well worth reading.

Much has already been written about Theranos and Elizabeth Holmes so I am just going to briefly share my takeaways.

1.  FOMO is a dangerous investment strategy.

2.  Even people with lots of money, success, and knowledge can be snowed.  People want to trust and believe, especially when the product/company seems to have the potential to transform an industry and improve people's health and lives.  If you happen to have millions to invest somewhere, don't skimp on research because you trust the good sense of other investors or board members.

4.  Real journalism matters.  Carreyrou had the guts and patience to dig in on this story and see it through (even despite threats to many of his sources) and did a huge public service by sticking with it.

5.  Scientific research matters.  Real, peer-reviewed studies are invaluable.  Labs that follow proper protocols are essential.  Again, if you happen to have millions to invest, it would be reasonable to want to see the labs and research.

Finally, Bad Blood reminded me that we need more people willing to ask tough questions, play devil's advocate, trust their gut, speak out, and be willing to walk away.

Email ThisBlogThis!Share to TwitterShare to FacebookShare to Pinterest
Labels: Book Review (Sort Of)

Money can't buy happiness or better weather, but it can buy stuff and sometimes stuff gives us a little life lift.

For about $8, you could lift your life with all three of today's products. 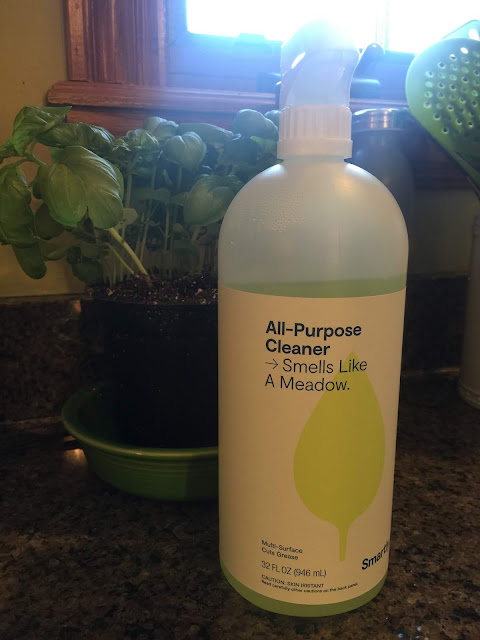 Life Lift #1:  Smartly All Purpose Cleaner Smells Like A Meadow
Buying cleaning products that smell good is a priority for me.  For years, I've kept Mrs. Meyers stocked at home with the occasional sub in of a Method or J.R. Watkins product.  I didn't expect much when I saw this large bottle of cleaner on the shelf at Target but was pleasantly surprised when I screwed off the lid to take a sniff.  I don't know if it smells exactly like a meadow, but the scent is clean, fresh, springy ... a reminder that spring will come, all the dirty snow will melt.  Let's call it "hope in a spray bottle."  Best part?  I think this huge bottle was either $1.67 or $1.76.  There are two other scents, but they didn't do it for me. 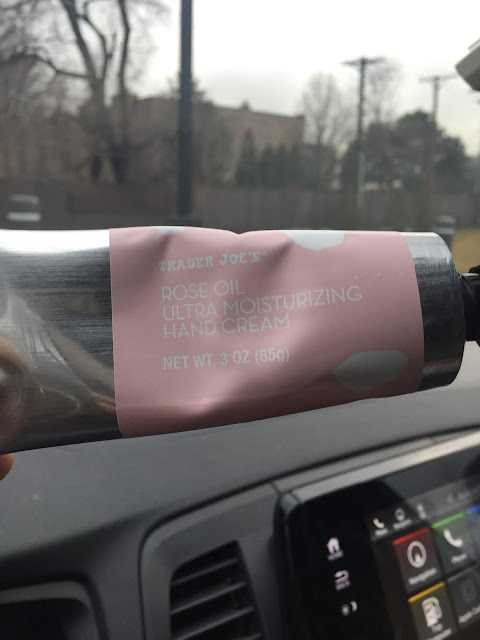 Life Lift #2:  Trader Joe's Rose Oil Ultra Moisturizing Hand Cream
The nearest Trader Joe's is about a twenty minute drive for me.  That's far enough that I don't go regularly.  I had an Aha! moment two weeks ago at my WW meeting (see what I did there with Aha! & WW -- Oprah, people, Oprah!!) when it struck me that I was halfway to Trader Joe's and could just scoot over there after my meeting.  Twas a delight to be back at TJ's and I secured some WW-friendly options as well as some cheap fresh flowers and the meringues, full-fat fruit and cream yogurts, and pretzel bagels that my kids love.  I stopped in after today's meeting for more of the same-ish and left with this Rose Oil Ultra Moisurizing Hand Cream.  Let me tell you ... it's plenty of life lift for $4.99.  It's a big tube of cream that is hydrating without being greasy.  I know rose is a scent that some people detest, but I am not one of them.  The cream smells fresh and rosy without being cloying or old-ladyish. 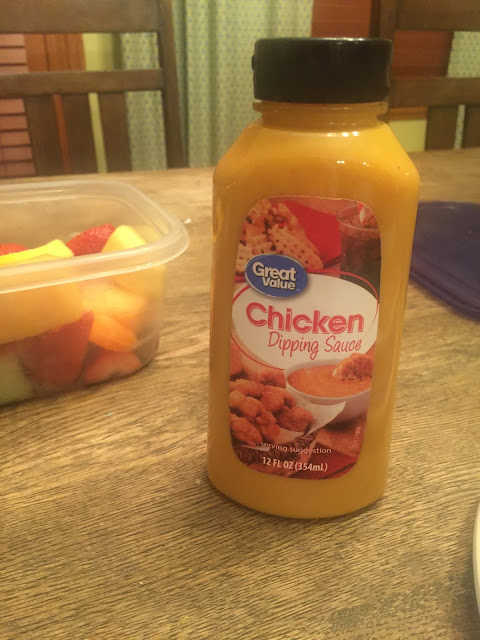 Life Lift #3:  Great Value Chicken Dipping Sauce
Conservative estimate is that I visit the Chick-fil-A drive-thru three times per week.  Once or twice on my own (it is two minutes from the place where I play tennis) and probably once a week on behalf of my family.  I'm there enough to be known by name ("Miss Megan") by multiple employees.  I've achieved Red Status via my Chick-fil-A One app, which means, NTMFB, that I am invited to visit the Chick-fil-A Home Office for a "complimentary backstage tour" for myself and up to five guests and can also enjoy two free tickets to the Chick-fil-A College Footbal Hall of Fame.  All of this is just to prove that I know the restaurant and its menu options, including condiments, quite well.  So when my friend Mina shared on Facebook that she had secured this Chicken Dipping Sauce from Wal-Mart and confirmed via family taste test that it mirrored that of the famous Chick-fil-A sauce, I knew I better get my grubby paws on some.  Before I could even say, "Don't change out of your PJs, kids, we're going to Wal-Mart," Mina had dropped off a bottle for me.  And guess what?  It tastes remarkably similar to the delicious and famous CFA sauce.  The Great Value sauce may have a slight smoky flavor that the CFA sauce doesn't, but all in all, they are very similar.  As a Chick-fil-A loyalist, I want to point out that they are very generous with sauce packets at the restaurant and they do sell larger tubs of their sauces as well.  But, they don't offer a squeeze bottle.  Can you believe that you can secure this delicious sauce in a conveniently squeezable vessel for a mere $1.62?  This product seems ideal for anyone who loves CFA and its sauce, especially if one loves CFA and its sauce but does not live near a Chick-fil-A.

There you have it, three little life lifts for less than 10 bucks ... what's giving you a lift this winter?

Email ThisBlogThis!Share to TwitterShare to FacebookShare to Pinterest
Labels: Finds and Buys, First World Problems and I Know It 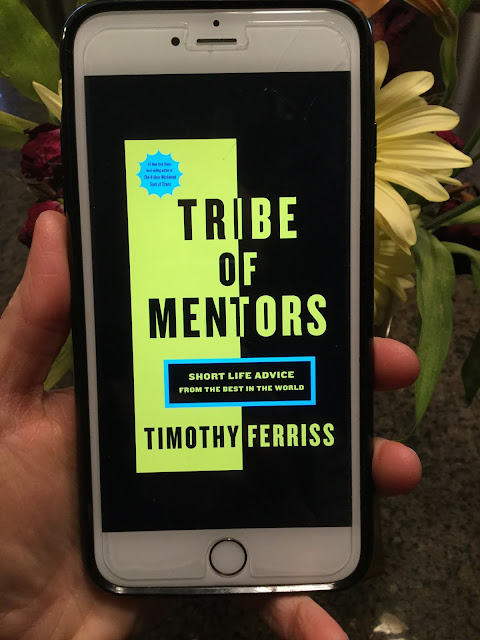 From October through December, I slowly made my way through Timothy Ferriss's Tribe of Mentors:  Short Life Advice from the Best in the World.  The advice is short, but there's a lot of it and for whatever reason, this was not an ebook that I flew through.  I read it in small chunks, took a lot of screen shots as I went along, and though I resented the time it took, I think the investment was worth it as there is plenty of wisdom and inspiration to be gained.  The advice comes from successful people in all walks of life.  Some pieces of advice contradict others, but there's something here for everyone, particularly for a young college student or recent graduate or anyone at a moment of uncertainty or transition.  Ferriss asks all of of the mentors in the tribe to answer the same questions, which is very effective as it is interesting to compare their answers.  Not all successful people became successful in the same way.

Instead of writing a massive summary post, I thought I'd start by highlighting two pieces of advice that resonated with me.

The first comes from Jon Call, best known as Jujimufu, an anabolic acrobat.  One of Ferriss's questions is "In the last five years, what have you become better at saying no to?"  I just loved Jon Call's answer:

"I've gotten better at telling my brain 'no' when it wants to relate to conversation with a 'bigger' story. What I mean is, somebody might be telling me a story about an experience they had, while I have a related story that sounds bigger or more dramatic than theirs. Rather than wait for a moment to jump in with mine, I'll just let that desire go and ask them more questions about their experience. What I've discovered is incredible: the loss of the opportunity to possibly impress someone is far outweighed by what I can learn when I ask more questions. There is always something else to their story that will amaze you. Don't expect that what they start with is as exciting as it will get. Ask and encourage them to say more."

I love this piece of wisdom because it makes conversation less exhausting.  Forget about ego and insecurity and just listen.  Instead of worrying about what you can teach, what you can share, how you might impress, just approach conversations with this thought:  What can I learn?

Not too far after Jon Call's advice came a related piece of wisdom from Evan Williams, co-founder of Blogger, Twitter, and Medium.  Here's the first sentence of Williams's answer to Tim Ferriss asking "What advice would you give to a smart, driven college student about to enter the 'real world'"?:

I've spent years of my life trying to please others and depending upon outside validation (grades, compliments, performance reviews, gold stars, etc.) and I like being reminded, even as I approach the "halfway" point, of the importance of learning in work (and life too, I hope).

One of the phrases I wrote in my journal for 2019 is LISTEN AND LEARN.  I'm not doing either perfectly, but I'm learning.

Posted by booksandcarbs at 11:26 AM No comments: