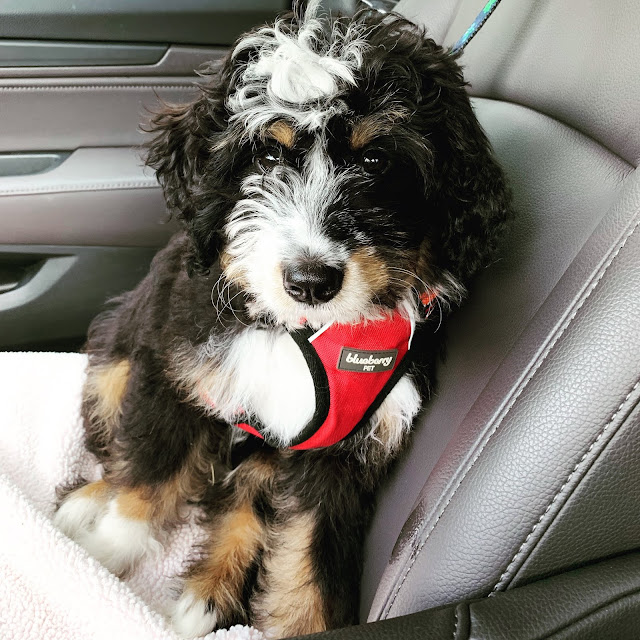 Meet Dandy.  He was born in February and joined our family on April 7th.  It's no coincidence that I haven't posted on this site since April 3rd.

Until last month, I had never had a dog in my life.  I grew up without one and my siblings and I were all nervous/afraid of most dogs (stemming in part from an incident when my brother, as a toddler, was bitten by a stray dog).  As I grew up, I was less afraid of dogs but still not that comfortable around them.  Thus, I was very anxious about welcoming a dog into our family.  My husband and kids eventually wore me down.  My oldest put together two different Power Point presentations about why we should get a dog -- the earliest of which he created five years ago as a second grader.  As a fifth grader, he wrote up a proposal pitching alternative family pets (mostly small rodents and reptiles) artfully intended to make me view a dog more favorably.  Two years later, I caved.  I wanted my kids to have the experience of loving and caring for a dog and prayed that I could open my heart as well.

I'm glad I didn't write about Dandy earlier because a puppy post in the early days would have been a doozy.  The first week gave me major flashbacks of my days as a new mom (short summary of early motherhood for me was that I was an anxious, lonely, decidedly un-breezy mom of a restless baby).  The similarities were unsettling:  getting up multiple times in the middle of the night to take Dandy out so he wouldn't pee/poop in his crate and thus hate being in there going forward; weeding through all the advice out there in books, YouTube videos, blogs, etc.; feeling like I was "on the clock" every time I left the house (similar to when you are newborn's food source) because I didn't want to leave him in crate too long; reckless willingness to buy gear, gadgets, treats -- anything I thought would make things easier; whispering and tiptoeing around the house when he was asleep; a feeling of fear/hopelessness that my life would never be the same again (it won't, but seems less bleak now); and a overall sense of anxiety and uncertainty about what to do and whether I was doing it wrong.  At one point, I was standing in the front yard practicing having him on a leash when I found myself praying that the person walking down the side walk would pause to chat with me -- this was a major flashback to the kind of loneliness and desperation I felt as a new mom.

All of the above sounds dramatic, but welcoming a dog (especially when you are brand new to the experience) is a HUGE adjustment.  And that first week, my husband was out of town for several days (on more of a boondoggle than a command performance), my kids were at school, and I was home just bumbling through the day and trying to figure out how I was going to accomplish basic life tasks in addition to puppy care.  Lots of things happened:  roundworm, vomit, nipping, accidents in the house, and more.  When my sister called me one morning late in the week, I started sobbing.  My husband eventually got home, and my kids figured out that I was on the edge of a nervous breakdown and stepped up their helpfulness.

The adjustment still feels HUGE, but things are getting easier and I am getting more comfortable and confident as a dog mom.  We have a dog trainer who has helped us a ton.  Dandy is able to take short walks, which I really enjoy and which give me hope for longer walks in the future.  We've successfully helped him through roundworm and two other parasites.  Good times.  We no longer wake up in the middle of the night to take him out (though waking at 6am for an hour of rowdy/crazy puppy time is not a major improvement).  Any of the kids can handle being on "Dandy duty" if I need to go somewhere, run errands, etc.  Seeing my husband and kids playing and cuddling with Dandy warms my heart.  I have appreciated my own quiet moments just relaxing with and petting Dandy. Pre-Dandy, I can't tell you the last time when I have sat outside in the sun on a weekday and just, you know, sat there and felt the breeze without trying to read something, check my phone, etc.

One of the coolest things to experience since welcoming Dandy is the way other people react to puppies and the reminder of how kind people can be.  We've gotten to know our neighbor's granddaughter and her two dogs and had a chance to better know another neighbor who also has a dog.  Bringing Dandy to the sports fields, I've had conversations with other parents of my kids' teammates that I would not have had if not for my furry conversation starter.  People pet him and talk to him (in hilarious baby voices).  Friends have given us gifts of treats, dog toys, and gear.  I sent an email about a month before Dandy arrived home asking local friends with dogs for advice and recommendations, and the thorough, wise, encouraging, practical feedback and wisdom I received was unbelievable.  Dog people are really good people.  I don't think I am a dog person yet but I can see it happening and aspire to the designation.

Until then, I'm trying my best to love and care for this puppy while figuring out how to proceed with the rest of my life -- writing, reading, exercise, laundry -- as well.  I'm sure it can be done, dog gone it.


P.S. -- It was very hard to choose just one cute puppy pic for this post, but you can see others on Instagram:  @ourdoodledandy  Also, I spent an embarassing amount of time curating a Spotify playlist with songs that feature "Dandy" (or "candy" and "Mandy" which can be easily adjusted) in them -- playlist is titled @ourdoodledandy

P.S. #2 -- At any earlier moment in my life, I would be shocked to discover I authored the sentences in the first post-script.  Times, they are a-changing.


Posted by booksandcarbs at 11:40 AM No comments: