I can't speak for every corner of the Midwest, but I'll take a stab at summarizing the past several months in my corner:  longest winter ever, followed by the wettest and coldest spring.  I don't know if official weather data confirms my summary, but I can say that with the exception of a handful of glorious days (or at least parts of days), it's been fairly miserable.  I admit to medicating with some retail therapy in the form of unnecessary but not super expensive perk-me-up purchases. 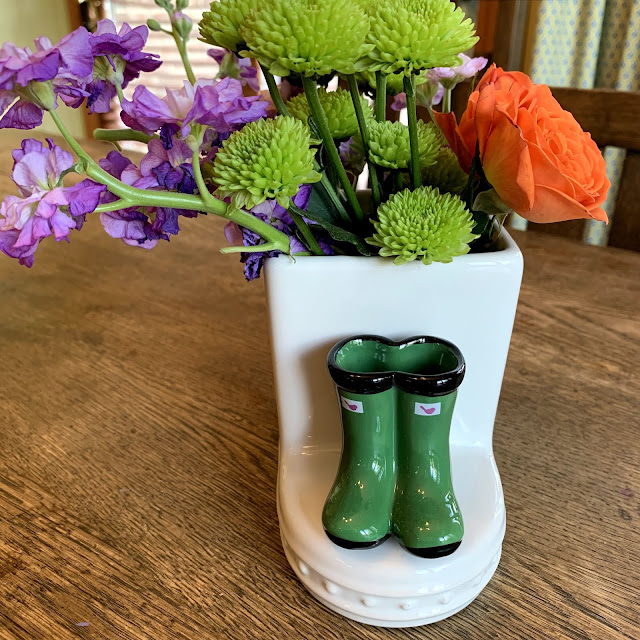 I've written about my love of Nora Fleming products before.  I couldn't resist the rain boot mini Nora Fleming came out with this rainy spring. 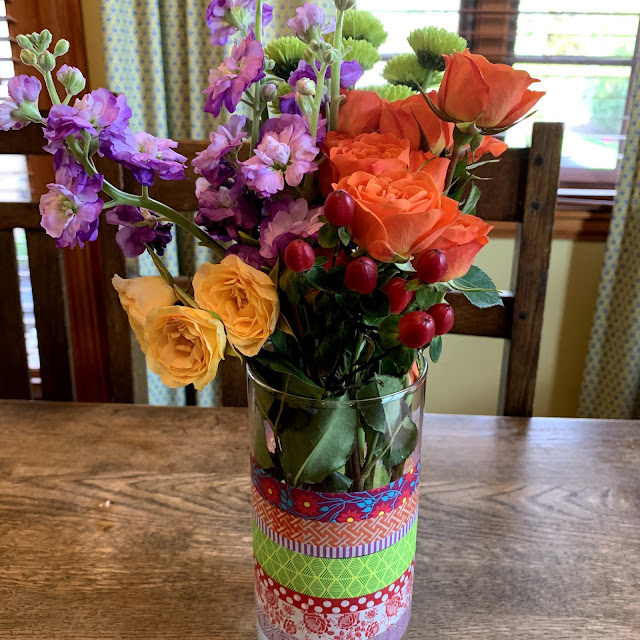 Grocery store flowers are always a good perk-me-up purchase.  I perked up a tube vase from Dollar Tree with some colorful spring washi tape. 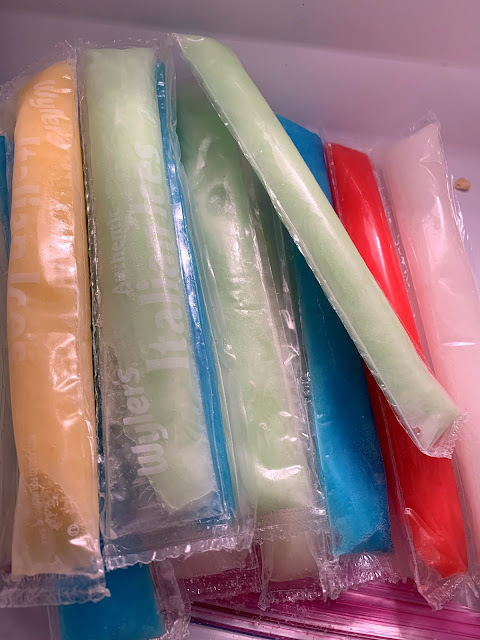 My kids don't need sunshine to enjoy popsicles.  We love the Wyler's Italian Ice ones.  They have the perfect texture and come in lots of delicious flavors (the orange is the best).  They're always available at Walgreen's, but I also bought a huge box at either Sam's or Costco.  Apologies that I can't remember which spot.  One warning -- if you don't clarify expectations with your popsicle eaters, you'll find abandoned popsicle tops throughout your house and every pair of scissors you own glued together with fruity goodness. 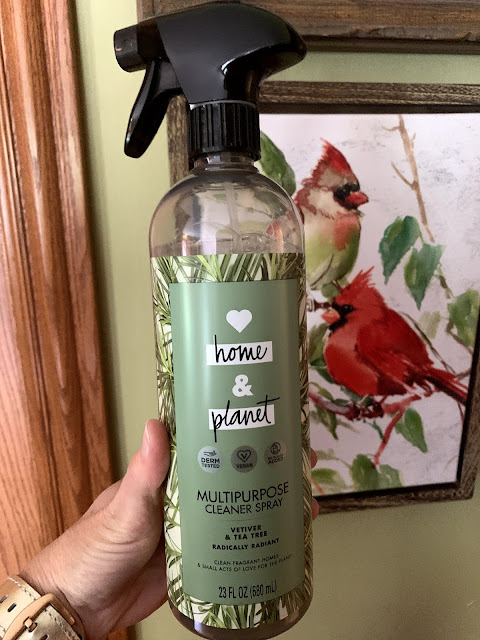 Good smelling cleaning products are a real perk-me-up purchase for me,  I am loving the Vetiver & Tea Tree scent from Home & Planet.  Really fresh, clean unique scent.  No, I don't know what Vetiver is either. 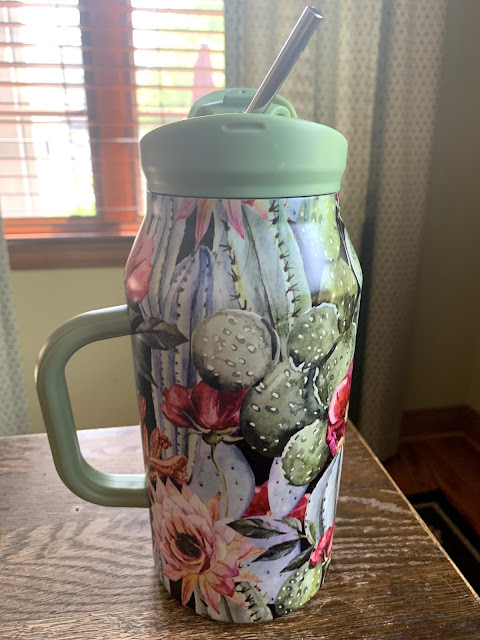 I was at Wal-Mart in search of a baby gate for our new puppy when I spied this giant insulated jug.  So far, I have used it to keep Diet Coke chilled and it has worked like a charm (even over several hours).  Actual goal is to drink more water this summer and this bottle will serve me well.  It was $14.95.

Knock on wood, but it seems we are finally entering a season of reliable sunshine.  Best news?  Sunshine is a free perk-me-up and you don't have to de-clutter it later.

Email ThisBlogThis!Share to TwitterShare to FacebookShare to Pinterest
Labels: Be Creative, Finds and Buys

When visiting my parents a couple years ago, I noted that the YMCA near their house had a Little Free Library in front.  I imagined that one day I would walk down there and check it out, but in my recent visits I've never found the time to make that half-mile journey on foot.  This evening, after securing some local food favorites at Kroger to take back to Pleasantville, I parked in front of the Y and my oldest and I finally checked out this LFL.

First off, I love the idea of a LFL in front of my childhood YMCA.  As a girl, I spent what in hindsight seems an inordinate number of hours at the Y.  Back in the 80s, one didn't languish in Pike for session after session.  You could actually learn to swim and advance through the classes Pollywog, Pre-Minnow, Minnow, Guppy, Pike, Fish, Flying Fish, Shark, etc.  Don't quote me on the progression or the class names, but I took them all, not because I had a huge passion for swimming so much as because my next youngest sister had a real passion for swimming and so we all had our "own stuff" to do at the Y.  That being said, more than half of my YMCA visits were spent outside the pool while my sister was practicing or competing.  With no cell phone or tablet to turn to, I had a rotation of things I did to while away my time at the Y:  visit the "new' water fountain near the racquetball courts, watch adults play racquetball from the upper viewing area, hope for a turn with the pool table or foosball, test the dryers in the locker room, pester my mom for change for the gumball and vending machines, read every scrap of paper on every bulletin board, read every plaque on the walls, review the posted swim team records (my sister had one, NTB), and, of course, if I came prepared, read a book.

Had an LFL existed in those days, checking its offerings would have been my most savored ritual of each trip to the Y.  Without a doubt.  Fast forward thirty-plus years. 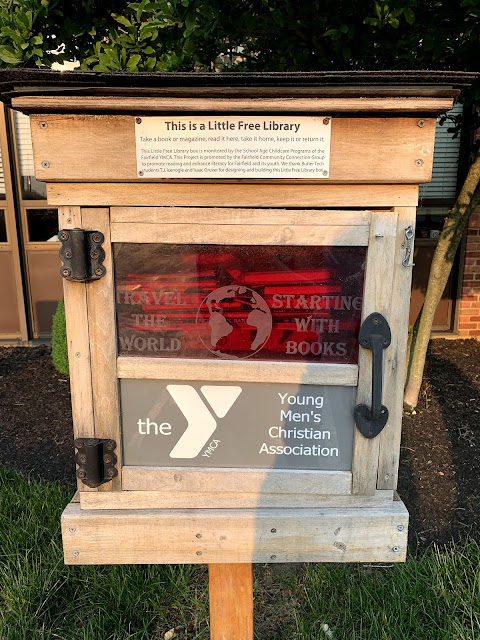 This LFL is a fairly basic model.  The wood is a bit faded, but I like the red-tinted glass.  I'm a big fan of the message:  Travel the world starting with books.  Don't we all want young readers to expand their worlds through books?  I've visited so many cool places in books and can't imagine my life without those "travels."  Side note:  I was interested to note that the phrase "Young Men's Christian Association" is emphasized on the front of the LFL since the word "Christian" has completely disappeared from the Y where I live now. 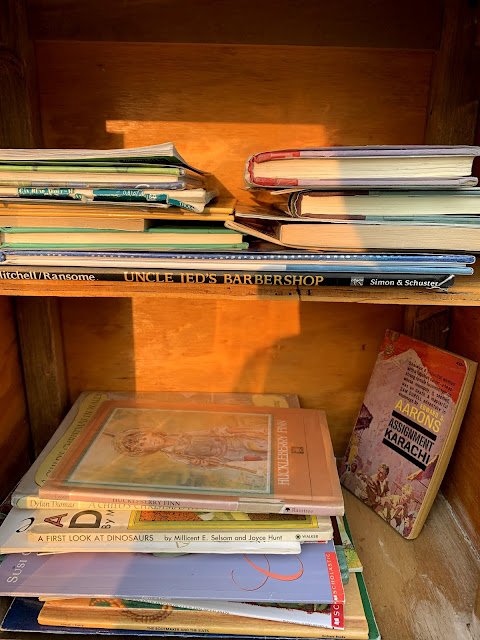 Perhaps it's the time of year, but the pickings were slim when we opened it up. 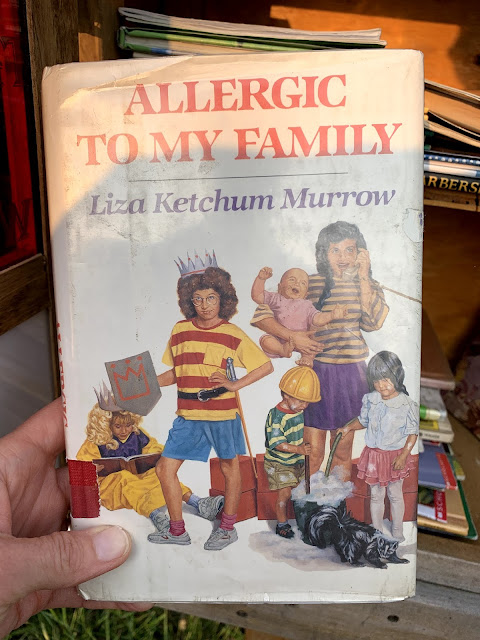 As is my tradition, I look at the offerings and play a little "game" of If I were desperate for a new book to read and had to choose one from this LFL, what would I choose?  Since the selection wasn't vast, especially for an adult reader, I decided to think ask myself what 1983 or 1984 Megan would choose.  I think that 80s Megan would be excited to check out Allergic to My Family.  I didn't look inside to the year of publication but the cover illustration took me back and made me nostalgic for the time in my life when I had endless hours to fritter away at the Y (though it was a necessity, not a choice).  I wonder if my daughter will feel similarly some day when she thinks of all the ways she  entertained herself in the hockey area of our Y during her brothers' games.  I will tell you that on our way out the door, I usually remember to remind her to bring a book and some vending machine money, evidence that even in the pre-LFL days, I did learn a thing or two at the YMCA.