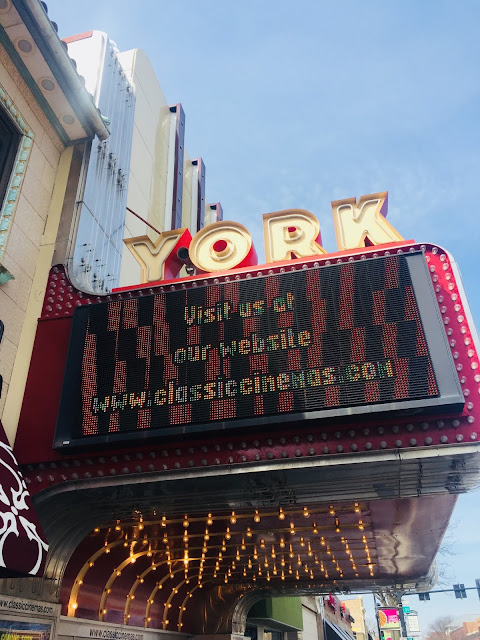 Today was pretty much the most springy day we've had all spring, but I had initiated indoor plans to see Gloria Bell with some friends.  Kid/Life logistics kept me from seeing the film last night with some friends from a women's group I'm in so I reached out to see if anyone could catch the show this afternoon.  I didn't know much about Gloria Bell, but it had a high Rotten Tomatoes rating and I liked the images I'd seen of of Julianne Moore dancing.  Looks fun, I thought.  Three of my pals were willing to meet up.

Gloria Bell is a tough movie to review.

The positives:  great cast (Julianne Moore, Brad Garrett, Rita Wilson, Jeanne Tripplehorn, a grown-up Michael Cera, and even Rudy/Sean Astin in a super strange sequence); great soundtrack (Who can't relate to the pleasure of singing Air Supply while driving?); a few moments that were kind of beautiful/funny/real/joyful, especially between Gloria and her daughter.

Here's the Gloria Bell teaser blurb: "A free-spirited divorcee spends her nights on the dance floor, joyfully letting loose at clubs around Los Angeles.  She soon finds herself thrust into an unexpected new romance, filled with the joys of budding love and the complications of dating."

To me, that description promises something light, fun, hopeful.  And while the movie wasn't the exact opposite of light, fun, and hopeful, it was a bit light on the light and the fun (though possibly, possibly twas a little hopeful at the end).

The negatives... The movie is slow.  I kept thinking, we'll get in the groove here soon, but we never did.  Gloria Bell is likeable, but I never quite figured her out.  As good as the soundtrack is, the score is kind of creepy.  There were moments when the instrumental music made me think something super dark was coming.  Unsettling.  Speaking of unsettling, lots of screen time for a hairless cat.  Also plenty of screen time for Julianne Moore's breasts (small but lovely, I guess, but I didn't need to see them so often).  There's also a lot of drinking and some pot smoking.  One of my friends described the movie as filled with awkward moments (kudos to the actors for making them seem so).  Another said, "This is one that makes you thankful for your marriage."

One lingering question from the film:  Do clubs where well-dressed, normal looking, middle-aged people dance to 70s-ish music really exist?  Asking for a friend.

I don't feel like I wasted my afternoon, but I don't think I'll urge others to rush out and see Gloria Bell.  Maybe if my friends and I had more to time to reflect and discuss afterward and make sense of it all, my review would be more positive.

But alas, school pick-up was calling so we all moved on.  In the window between movie and school pick-up, I took advantage of the gorgeous day to pop into The Pink Elephant (hospital resale shop). 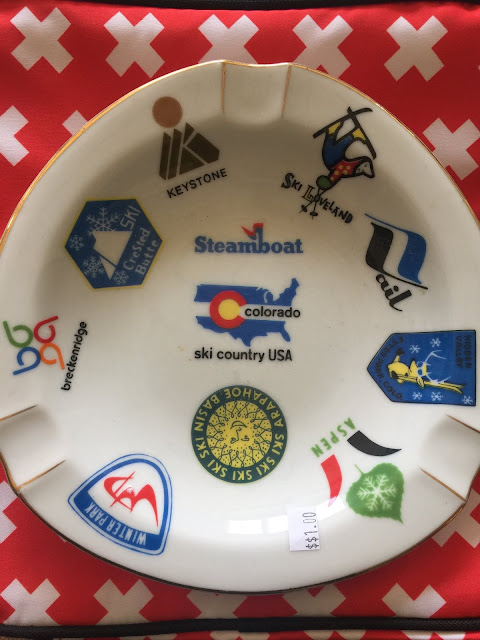 I couldn't resist this Colorado "candy dish" (which I realized upon bringing home was an ashtray -- Gloria Bell is a smoker, btw).  I washed it and am going to give it to my friend who grew up in Colorado. 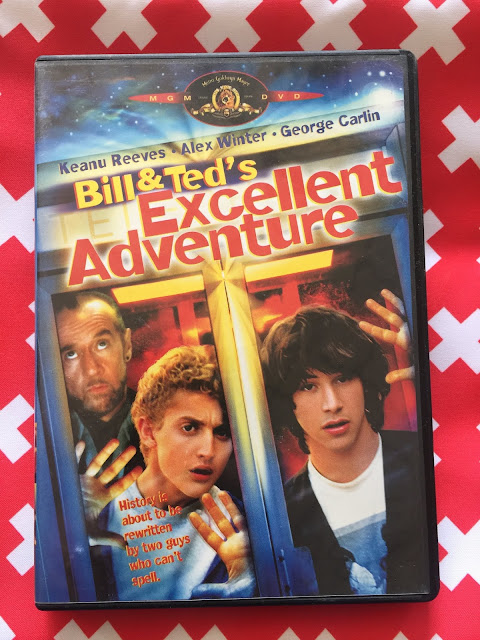 Pink Elephant customers could choose a FREE DVD with purchase so I nabbed Bill and Ted's Excellent Adventure, which is actually light and fun, if I'm remembering it correctly.  If we can get our DVD player to work, the kids might like this one.  Or, maybe we'll save it for the RES on our next road trip.  Good feeling to secure a candy dish and a DVD for one buck.

All in all, a good spring afternoon.


Posted by booksandcarbs at 7:47 PM No comments:

Email ThisBlogThis!Share to TwitterShare to FacebookShare to Pinterest
Labels: Finds and Buys, Let's Go To The Movies Annie

Favorite snacks from the first quarter of this year... 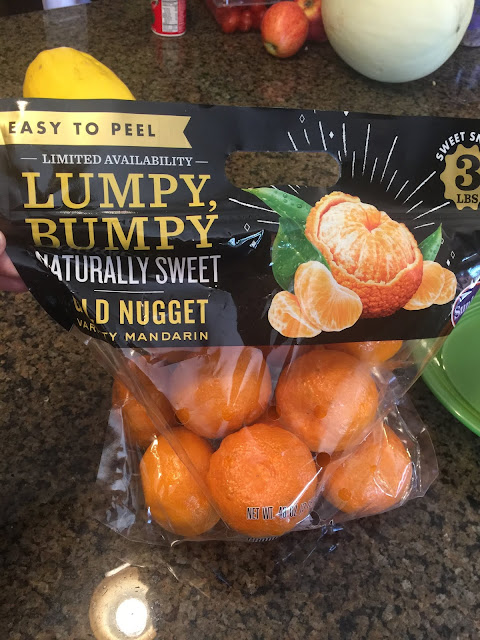 I found these Lumpy Bumpy Mandarin Oranges at Marianos.  They are larger than clementines, easy to peel, and SO GOOD.  I've had six in two days and now the kids are in on the act so there's only one left.  Need to hurry back as the packaging warns of "limited availability." 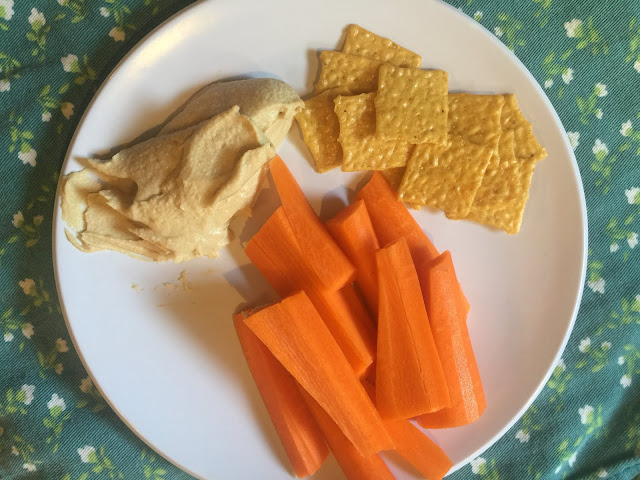 Two things going on in this Snackshot.  First, there are the Nabisco Corn Thins.  Honestly, it's not the most exciting cracker you'll ever eat, but for those of us living the WW lifestyle, the bargain is attractive:  17 crackers for 1 WW Smartpoint.  The Corn Thin is salty enough to enjoy on its own, but I prefer it as a vehicle for other foods (see hummus above and once I even used the Corn Thins as a nacho base).

Second thing happening in the Snackshot ... carrots!  I think I actually forgot that you don't have to eat raw carrots in their slightly slimy, bagged baby form.  I was tasked with bringing a veggie platter and a fruit tray to a ladies' painting party.  I found some baby cucumbers that I wanted to slice longways (first things to disappear, btw) and thought it would be more symmetrical and visually appealing if I had longer carrot sticks as well.  I got out the Costco peeler I've had since my wedding shower (thank you, Aunt Pat!), went to town, and then sliced them up.  And I haven't looked back.  I've been eating way more carrots that I peel and slice myself than I ever did babies from the baggie.  I'm embarrassed that I forgot peeling and cutting carrots myself was an option. 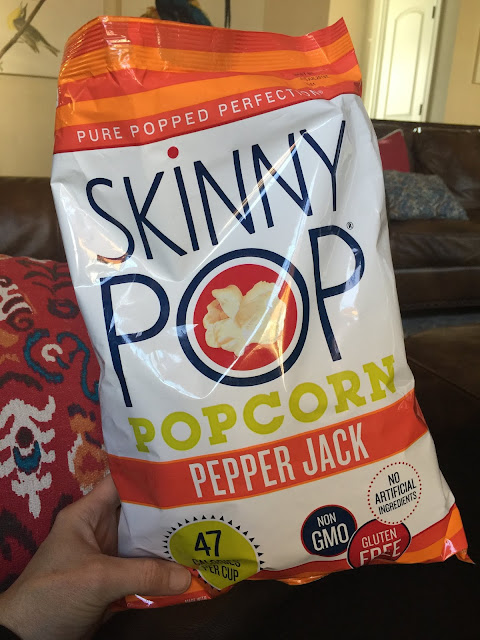 If you're like me, regular Um, Skinny Pop isn't blowing you away these days.  Sure, it's a caloric bargain, but the plain version is starting to feel blah to me.  I tried the Pepper Jack version at an airport in January and loved it.  It's got plenty of flavor and a lil kick.  I haven't seen a movie yet in 2019 but when I finally do, I'll be packing some Pepper Jack Skinny Pop in my large mom purse.  Outside of airport convenience stores, I've only been able to find the Pepper Jack variety at Walgreens, but as I go there at least thrice a week, it's been easy to stay supplied.  I've also tried the Black Pepper Skinny Pop, which I like but not as much as the Pepper Jack.  I am not a fan of the Aged White Cheddar.

Noted but not pictured because I am pretending I didn't eat them:  two bags of Brach's Conversation Hearts purchased at Walgreens (see above) as part of post-Valentine's Day clearance; a bag of Starburst Jelly Beans because they are amazing, even six weeks before Easter.

Favorite snacks these days?  Do tell.