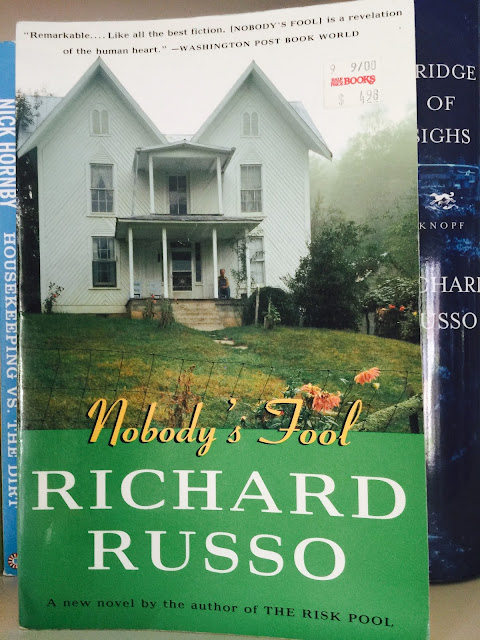 Thanks to the Half-Price books price tag I never removed, I can see that I likely first read Richard Russo's Nobody's Fool sometime in late 2000 or early 2001.  During that time period, I was teaching high school English in suburban Cincinnati.  I had recently completed my M.A. in English and was contemplating a big change (that I would later end up making) and dating my now-husband long distance.

Here are some thoughts on Nobody's Fool (I am copy/pasting from my own Goodreads), which I awarded five stars:

The first thing you need to know about Nobody's Fool is that I've read it three times over the past two decades. With bulging bookshelves, a fully-stocked Kindle, and an ever-growing TBR list, I am only going to reread books that I really love. Is Nobody's Fool a book you could love as well?  Depends, I guess. Russo is the master at depicting life in a small, sad, depressing town peopled with citizens who are imperfect, frustrating, and often unattractive (in various ways). And yet, his books are not depressing. They are funny and true stories of friendship, family, and community -- a pageant of flawed but recognizable and often lovable humanity.   His novels are funny even when they are sad. Now that I'm finished (again), I can crack the spine on the long-awaited sequel, Everybody's Fool. If you are an audiobook listener, I highly recommend Ron McLarty's narration of Nobody's Fool: exquisite. 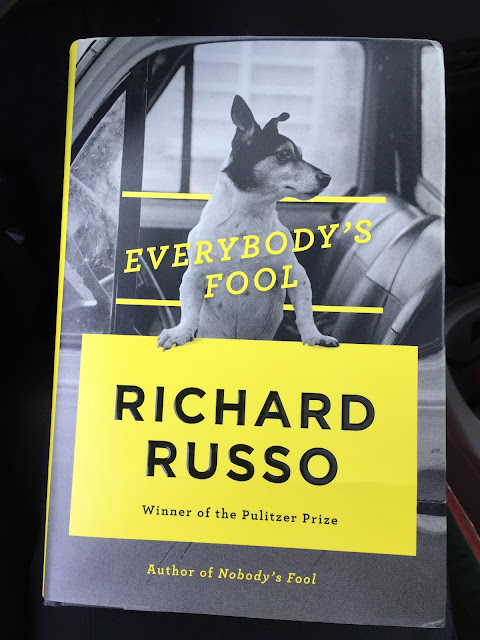 Here's my copy of Everybody's Fool, purchased sixteen years after my copy of Nobody's Fool.  Boyfriend is now my husband.  Three kids now, all old enough to be readers themselves.  Big career change made and then (more or less) abandoned.  You might also be interested to know that in the years between Nobody's and Everybody's Fool, my sister met and married a guy from the neck of the woods where these novels are set.  She lives outside Saratoga Springs, NY, which has to be the model for the fictional Schuyler Springs of Russo's novels.  I've been there, NTB.  All of previous is not necessarily relevant to my thoughts on the book, just me wanting to mark the passage of time.

My thoughts on the long-awaited Everybody's Fool, which I awarded four stars on Goodreads:

I wish Everybody's Fool contained more Sully, but there was enough that I felt like I knew how far (and not far) he'd come since Nobody's Fool and was satisfied with the updates received on Sully and  his friends and frenemies. Everybody's Fool focused more on Doug Raymer.  Though a minor and unmemorable (to me) character in the first book, I really liked Raymer's character and storyline in this book. Everybody's Fool is darker than the first book, but still funny and ultimately more hopeful than bleak. Regrets? I'd have liked to see more glimpses of Sully's son Peter and grandson Will. Annoyances? A couple of plot points don't line up between the two books: the timing of the end of Ruth/Sully's relationship and the timing of Big Jim's death (this is not a spoiler as the event is past history in both books and not integral to the plot -- but still, I like things to be consistent and it seems like something an editor would catch. Maybe Russo is so talented that he doesn't get edited?). I remain a Richard Russo superfan and look forward to whatever he offers next. 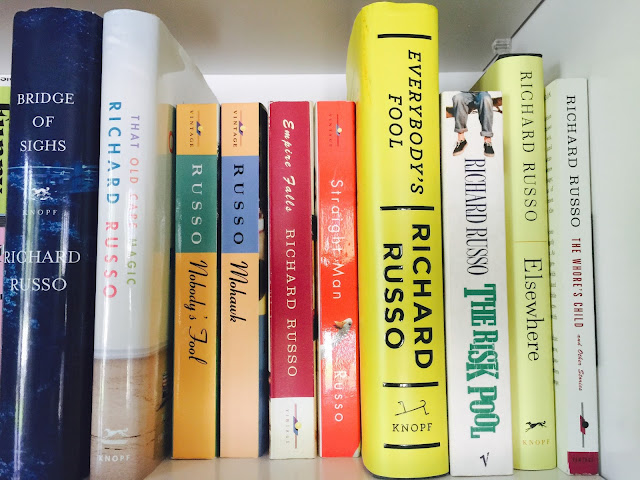 As a Richard Russo superfan, I urge you to try one of his books if you've never.  Where to start?  Nobody's Fool is as good a place as any or perhaps the Pulitizer Prize-winning Empire Falls.  If you've spent any time in a humanities graduate program, you should try Straight Man (another book that I have read three times), a campus comedy centered around an English professor.  Once you fall in love with Russo's writing and have a few of his novels under your belt, read his memoir, Elsewhere. 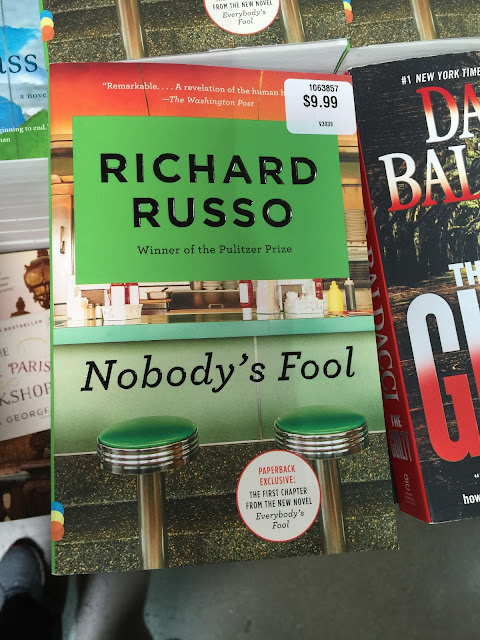 Here's the fancy new copy of Nobody's Fool that I spied at Costco.

Richard Russo is one of my all-time favorites.  Who are some of yours?
Posted by booksandcarbs at 6:16 PM

Email ThisBlogThis!Share to TwitterShare to FacebookShare to Pinterest
Labels: Booking It