My audible.com credits refresh on the 12th of each month, and I didn't get around to spending my December credits until January.  December is a heavy listening month for me with all the cleaning, wrapping, and cooking that beg for audiobook accompaniment.  I never ran out of listening material though and squeezed in my annual revisting of Jane Austen's Pride and Prejudice, expertly narrated by the late, great Flo Gibson.

This month, two credits got me three audiobooks.  I don't usually bite on the 2-for-1 sales as the curated selection of titles isn't always my cup of tea, but this month I managed to find two books I thought I'd enjoy. 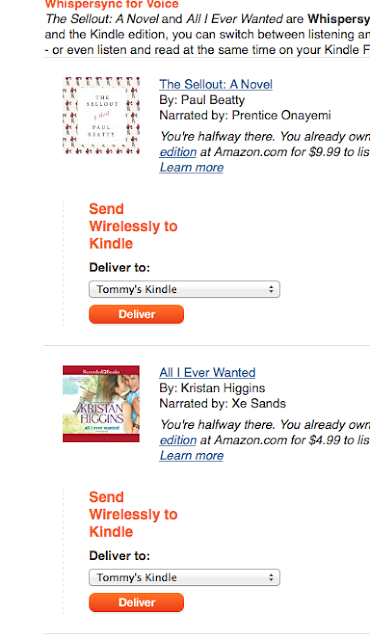 I think it's safe to say that I may be the only Audible.com subscriber who selected these two books together.  Paul Beatty's The Sellout has been on my radar for a while:  Winner of Man Booker Prize, Winner of National Book Critics Circle Award in Fiction, Winner of John Dos Passos Prize for Literature, and more.  I'm listening to it now.  The writing is great, sharp, really just excellent.  The book is funny but in an uncomfortable-edgy-semi-ridiculous-maybe-tragic-way.  I'm about a third of the way through and still getting a feel for what Beatty is doing here, but very much liking the book.  Very well narrated, by the way.

I read If You Only Knew by Kristan Higgins for a book club last year (though, per usual, I missed the meeting).  It was enjoyable, satisfying but not taxing and funnier than I expected -- just the kind of listen I like to have on reserve.  We'll see if All I Ever Wanted is similar. 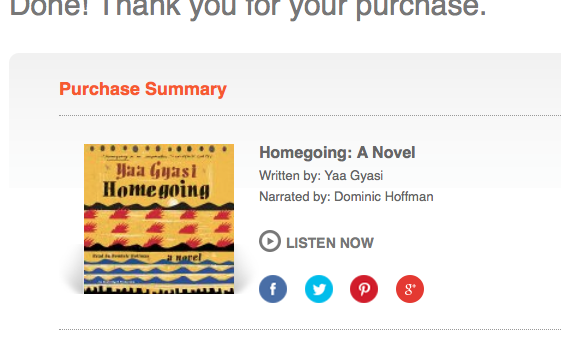 Since one monthly credit had earned me two books, I spent a couple days pondering how to spend the second credit.  I've been hiding from Yaa Gyasi's Homegoing (sisters, Africa, America, slavery) even though it's getting raves all over the place and positive reviews from readers I trust.  I didn't select it from the BOTM Club.  I didn't bite on the post-Christmas ebook deal price.  But I decided to put on my big girl pants and buy it.  I'm sure I'll love it.  The New York Times, NPR, Time, and Oprah all did.

Posted by booksandcarbs at 6:37 PM