Once again, I'm failing to report in a timely fashion.  To catch up any new readers:  I've been a 2-credit per month Audible subscriber since 2003.  The ritual of spending these credits is a monthly highlight that I have been reporting upon for the past few years.

I spent my first January credit on John Carreyrou's Bad Blood: Secrets and Lies in a Silicon Valley Startup.  I've already written about this book.  It's only March, and I am confident that Bad Blood will be in my top five books of 2019.  This true story is endlessly fascinating to me, and I am so excited to watch the HBO documentary about Elizabeth Holmes.  Before you watch it, I recommend reading Bad Blood. 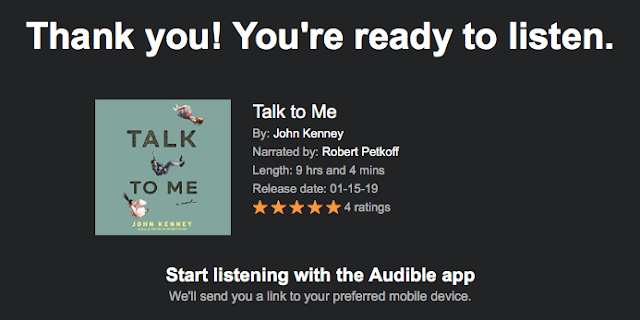 Not sure why I delayed, but I spent my second January credit in early February on John Kenney's Talk to Me.  The story this novel depicts is one that is going to become increasingly familiar:  the story of how one's life implodes after one does something regrettable/despicable that is caught on film.  Internet-fueled public shamings are part of life now, and I think this novel tackles the topic well, though its ending is perhaps a bit too sunny.  I think I preferred the non-fiction take on this topic in Jon Ronson's So You've Been Publicly Shamed, but still, I'm very glad to have listened to Talk to Me. 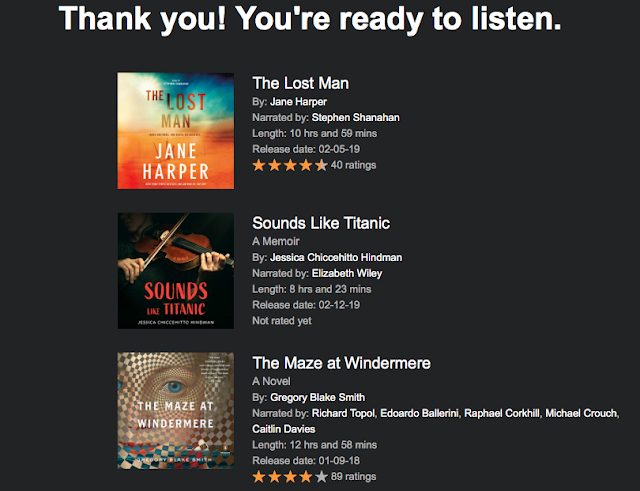 Not sure how I bought three books with two credits in February.  Perhaps I had returned something along the way or purchased one of the three books (seems unlikely, but my feeble memory can't reconstruct the events of a few weeks ago).

I chose Jane Harper's The Lost Man because I so enjoyed The Dry and Force of Nature, the first two novels in her Detective Aaron Falk series.  This stand-alone mystery is about past sins and family dynamics and prominently features the punishing heat of the Australian Outback.  I'm basically on board for whatever Jane Harper writes from this point forward and will mostly likely always opt to listen to her books as I love the Aussie narration.

Jessica Hindman's Sounds Like Titanic was an attempt to be thrilled (once again) by a truth is stranger than fiction story, having been so blown away by Bad Blood and by Michelle McNamara's I'll Be Gone in the Dark.  While Sounds Like Titanic is a mighty strange tale, I didn't find it as powerful as the others I just mentioned.  Hindman pretends (on purpose) to play the violin as she tours with a strange and strangely compelling composer for several years.  Hindman tries to place this experience in the context of feminism, the female body, her West Virginia upbringing, and her outsider status at Columbia.  The second person point of view makes her conclusions feel a bit too sweeping so that didn't work for me.  Hers is definitely a unique and uniquely American story though.  I'd actually enjoy learning more about the composer.

I put Gregory Blake Smith's The Maze at Windermere on my TBR list after reading a glowing review by Ron Charles.  I loved this novel and its glimpses of Newport at different moments in history.  It took a bit to settle in to all the storylines, but I was intrigued by all of them and liked how they were tied together by questions of power, possession/property, love, class, and marriage/potential for marriage.  I've been to Newport twice, which improved the reading experience.  I wanted the novel to go on longer as I felt invested in all of the storylines and would have been happy to see them endlessly play out.

Any other Audible subscribers out there?  Any credit-worthy listens of late?
Posted by booksandcarbs at 12:31 PM