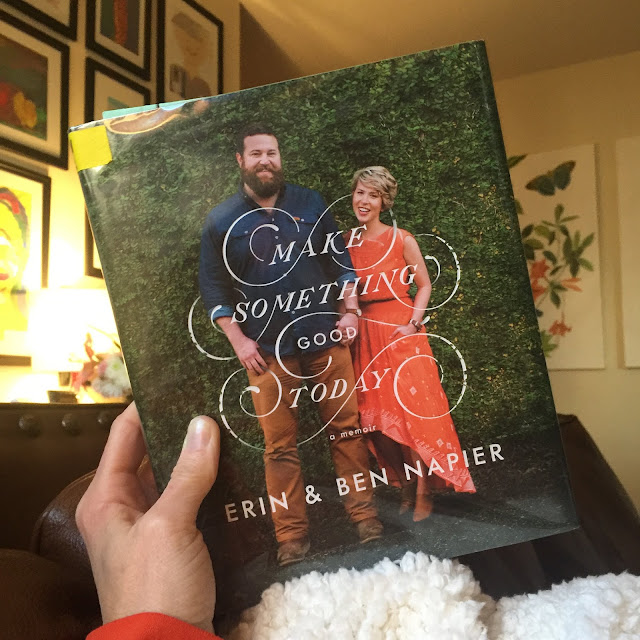 Erin and Ben Napier's Make Something Good Today called my name when I was at the library yesterday.  I've never seen their HGTV show, but something about the book title, Ben's warm smile, and Erin's cute haircut made me want to check the book out.  I started it last night and then, because this was a rare evening with no youth sports or meeting or carpool commitments, had the opportunity to cozy up on the couch late this afternoon and early evening and finish it.

I've been in a project mood lately.  After a long winter that was dominated in January and February by a nearly all-consuming (at least mentally) volunteer job, I am eager to do stuff, make stuff, try stuff, create stuff.  I'll be sharing some of those projects in upcoming posts.  And, spoiler alert:  posting regularly on this site is a high priority project.

In Make Something Good Today, Erin and Ben Napier share their childhoods, love story, and career paths ... the moments and choices that led them to their current life as parents, business partners, and co-hosts of an HGTV show set in their beloved hometown of Laurel, Mississippi.  I liked their straightforward writing style and all the beautiful photos and images throughout the book.  There's plenty of inspiration here for anyone looking to renovate a home, take a creative risk, or make a major life change.

I want to write about two aspects of the book that resonated most with me.

The first is the fact that Erin kept a daily online journal for eight years that she called "Make Something Good Today."  We're all familiar with the general idea of a gratitude journal, one-sentence diary, or daily list of signs of God's love.  I've never seen Erin's online journal, but I like the way she talked about it as active and creative:

Writing was a performative act; I wasn't just passively recording what happened but also actively choosing what had happened.  What would be imprinted.  What was worthy of permanence and what could be discarded.  It could be something as simple as the way tree branches looked in the light or a piece of strawberry pie or something larger, such as finishing a house or an elaborate surprise Ben had planned to cheer me up.  On bad days, I'd consciously try to search out the positive or make good things happen so I wouldn't be empty-handed at night when it came time to write.  In this way, the practice has changed my life (XI). 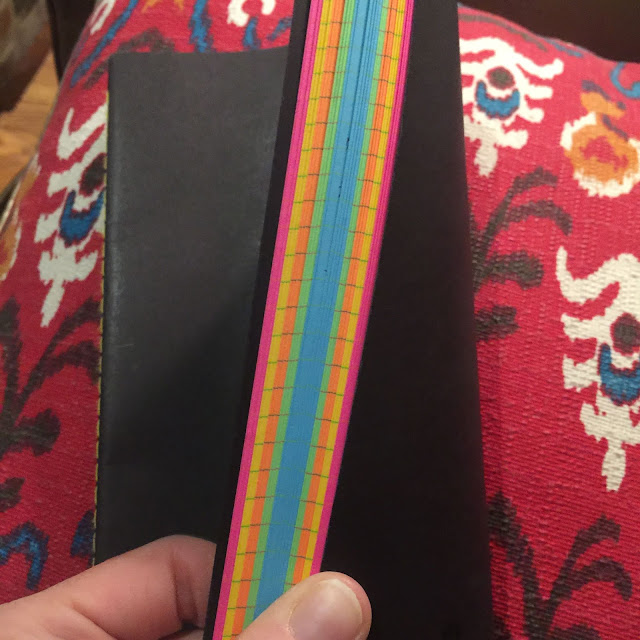 Not for the first time but this time more successfully, I've been keeping a journal with some daily nuggets of goodness.  I haven't given the project a name, which is actually making it easier to just jot down the good moments, interactions, names, sights, feelings, tastes, connections from each day.  I've forgotten a few times, but have been surprisingly consistent.  I started with the pink pages on the left and am now mid-way through the blue ones in the middle.  I tried to take a pic of the actual pages but didn't post it because I became paranoid that my tens of readers would be able to see what I wrote (Why is she so thankful for Thornton's Diet Coke?  She sure comments on the smell of the air a lot).  On the rare occasions when I have gone back and re-read the entries, I feel overwhelmed with gratitude and kind of unworthy of it all.

Back to the Napiers though.  In addition to Erin's confirming the value of recording (creating, seeking, finding) the good in our days, I also found it refreshing to read about people who are DOING things ... designing stationary, building furniture, having dinner with friends, taking walks, painting murals, running for public office, renovating homes, revitalizing their town, starring in their own HGTV show, and etc.  A lot of it sounds exhausting, but I'm inspired by people who take risks, make changes, and have the courage to put their hearts into it (whatever it is for them).

I'm not making plans for my own television series, but I will keep on with my unnamed daily good stuff journal project and will keep making time to try, do, and create the stuff that interests me.  If you're in need of a little inspiration, check out Make Something Good Today.

I'm not planning to go online with my journal, but in case you're interested, here are some bullets of the good in today:
* drop off "I love you" x 3
* caramel crunch cupcake
* one ace and a couple of killer forehands, laughs with Anne on the court
* after-school Rosary community
* Jess making me laugh
* Fitness Marshall dancing with Bibs
* couch, book, no logistics
* Wonder Years scene on the beach

Wishing you many good days and the eyes to see the good in every day.


Sidenote:  Erin and Ben Napier seem like a very happy, loving, devoted couple.  I think it's important to note that solid, loving marriages don't all look the same so don't be feeling blue or like a loser if your husband, like mine, does not make you a hand-crafted book each year for your anniversary.
Posted by booksandcarbs at 8:16 PM