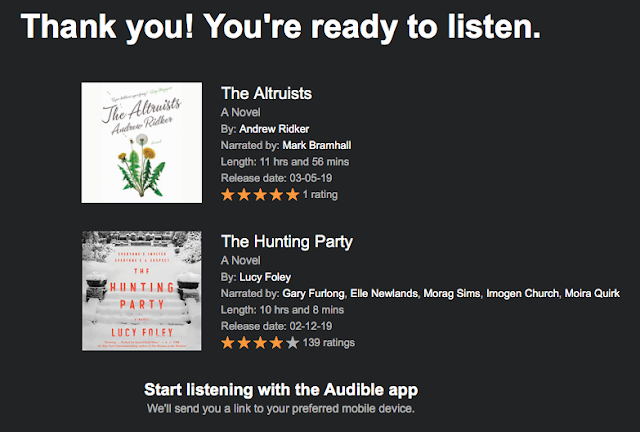 I didn't want to keep you waiting.  Wink wink.  Here's how I spent my two Audible credits for March.

The first book I chose was Andrew Ridker's The Altruist.  I can predict what negative reviews will say:  characters not super likeable and often annoying, nothing much happens, ending too tidy.  I really liked it though.  It's a family story about people of all ages trying and, through most of the book, failing to get their sh*t together.  But I was interested in the characters and their sh*t and rooting for them to find their way and find each other.  Lots of "just right" details throughout and some humor too.  It's also sort of a campus novel, which I like, and was set predominantly in St. Louis, a city with which I'm somewhat familiar.  The ending was bravely hopeful, and I found it all pretty satisfying.

Lucy Foley's The Hunting Party was also a satisfying listen.  It was a bit predictable (unless my powers of observation and inference are just extra keen, which I doubt), but I enjoyed the ride.  College friends take their annual New Year's trip, this time to a remote string of luxury cabins in the Scottish Highlands.  Great set-up and setting.  This book shifts perspectives and I liked how the story unfolded in layers.  There were multiple narrators, all strong, which added interest.  Solid listen.
Posted by booksandcarbs at 4:11 PM